Posted by JaneRabadi on Oct 20, 2016 in Architecture, Design, Northern, Wanderlust | No Comments

Shannon and I returned a week and a half ago from spending four nights in Moscow, Russia and three nights in Helsinki, Finland. I’d really wanted to post a few stories during the trip but at the last minute I decided to ditch my laptop. The thought of lugging it around with all of the other crap I had crammed into my suitcase and camera bag was completely unappealing and, I have to say, I’m glad I just enjoyed being in the moment during those eight days. They flew by so quickly!

First, let me describe a bit of what it was like flying with Aeroflot Airlines. To begin with, the gate at LAX was insanity and claustrophobic. People pushed and shoved like cattle and the airline staff stood holding these absurdly tiny signs in an attempt at organize rows of seating prior to boarding, occasionally yelling at the throng of unruly passengers as they tried to bully their way past them. We were soon to learn that this is common for how people engage with lines of any sort in Moscow – lots of pushing and you just have to jump in there and become part of the swarm of energy and momentum, or get trampled. 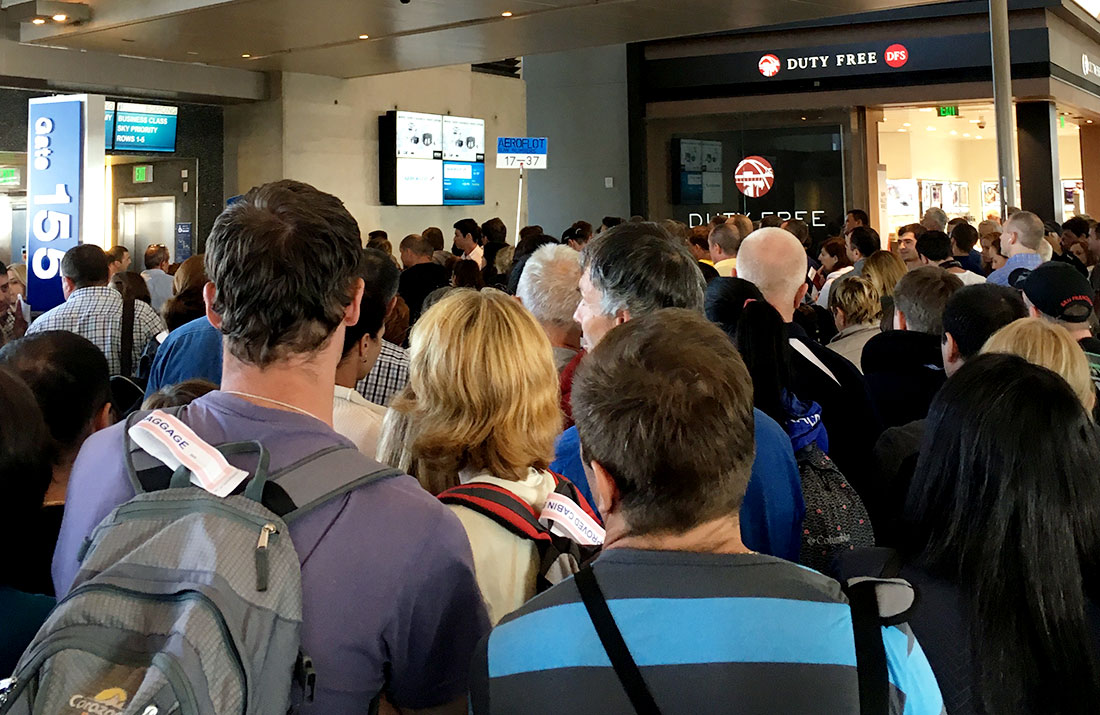 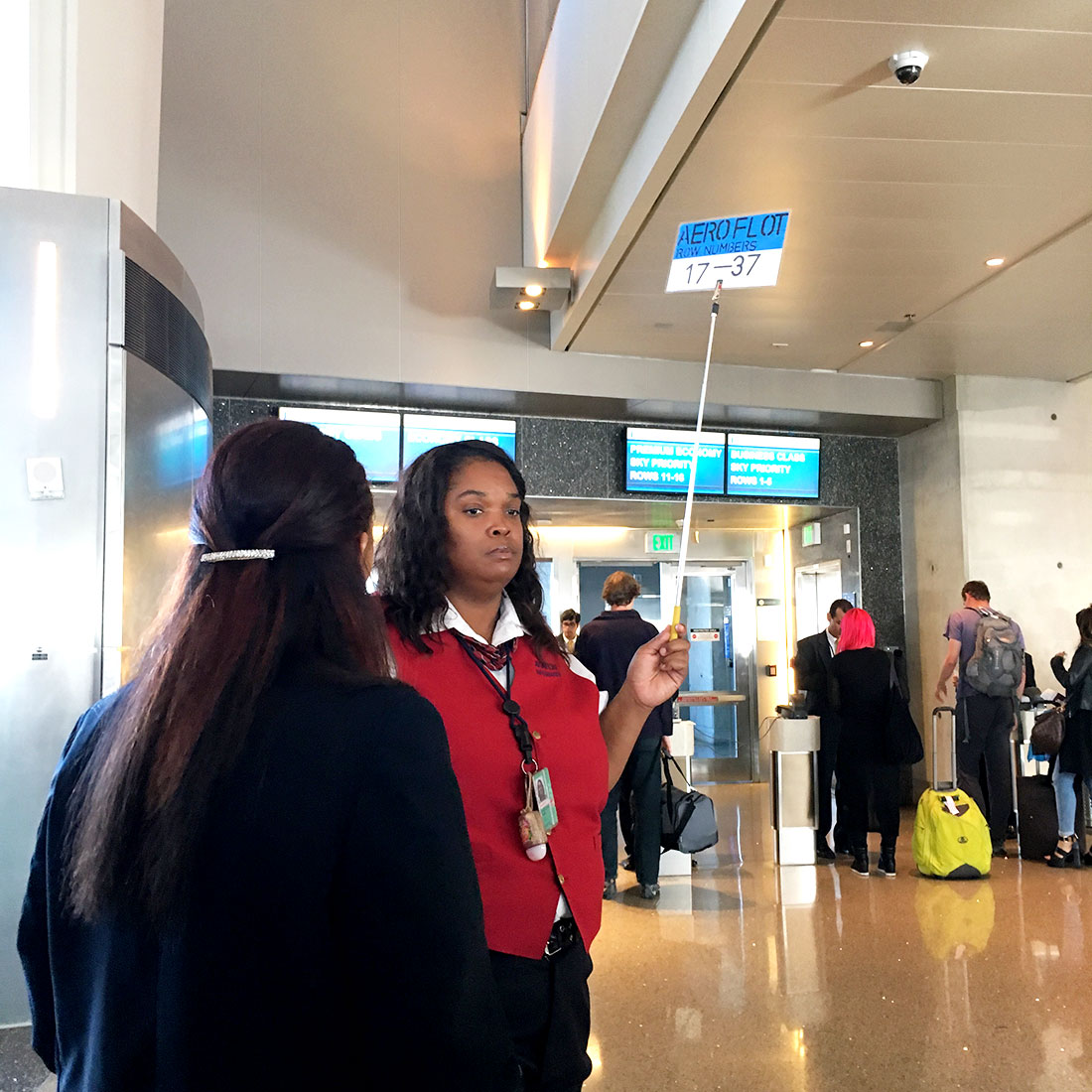 [Aeroflot Airlines boarding gate chaos at LAX. This employee looks shell shocked and I’m pretty sure she was, right at the moment I snapped this photo, considering the best place to stop for a drink on the way home after enduring our stampede onto the plane.]

I nicknamed Aeroflot “Menopause Airlines” because for the duration of the 12 hour flight the air temperature would swing wildly between stifling hot and freezing cold every 10 minutes. The seats were the size of saltines, the food was mysterious and brown, and we were offered water very seldom on the agonizingly long flight from LA to Moscow. That said, there were plenty of great options for movies and tv shows (they had Season 2 of FARGO, for god’s sake!), they poured a full glass of wine with our strange meals, and we had blankets for the times the plane dropped to freezing temperatures. The flight attendants weren’t exactly warm and friendly but they got the job done and took their jobs seriously. On the flight home, a German woman wouldn’t get out of my seat and insisted that I sit by the window. I always always always book aisle seats on flights over two hours long, so even wild horses wouldn’t have been able to drag me into the window seat. I had to ask one of the Aeroflot stewards to help resolve the situation. He literally had to physically move her over, but he got me my aisle seat and was my hero that day. (I offered the woman crackers to help ease the tension and she scarfed them down and later offered me Gummy Bears, so all was good in the end.)

So, enough about the flight and now onto some photos and stories of Moscow! 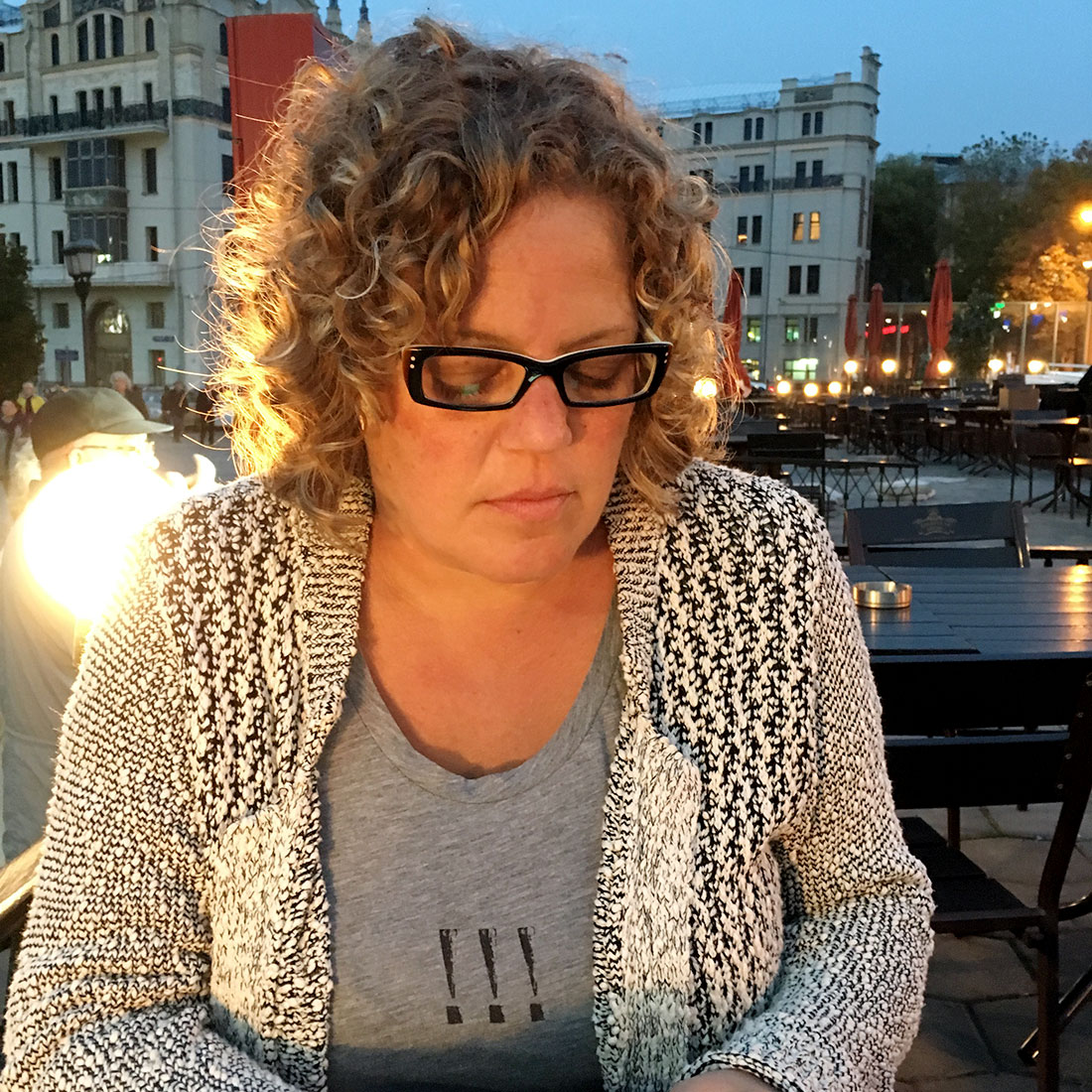 [Shannon attempting to translate the menu of insanity]

We got into Moscow late in the afternoon and checked into the Metropol, a hotel that gave the best service of any hotel I have ever stayed. Once we’d freshened up we ventured out like zombies to find some dinner, wandering around the area outside of Red Square in a haze unique only to jet lag. We staggered to a restaurant with outdoor seating so we could people watch and ordered from a menu full of food options such as bear dumplings and fish eggs and “salad” with mayonnaise for dressing. I seldom eat meat so my dinner was a plate of sliced cucumber and red peppers, which resulted in me later buying a bag of potato chips from a bodega and eating them in bed before crashing out. Two and a half years ago I went to a place in Siberia called Salekhard and I have never been so hungry in my life! For three days I sustained on yogurt, cucumbers, cheese and the M&Ms and almonds I’d bought for the plane ride. I vividly remember the Indian restaurant in the Moscow airport on the way home and how my work colleague and I nearly wept as we ordered 85 plates of food and ate till we thought we’d explode like rice and cauliflower filled piñatas. 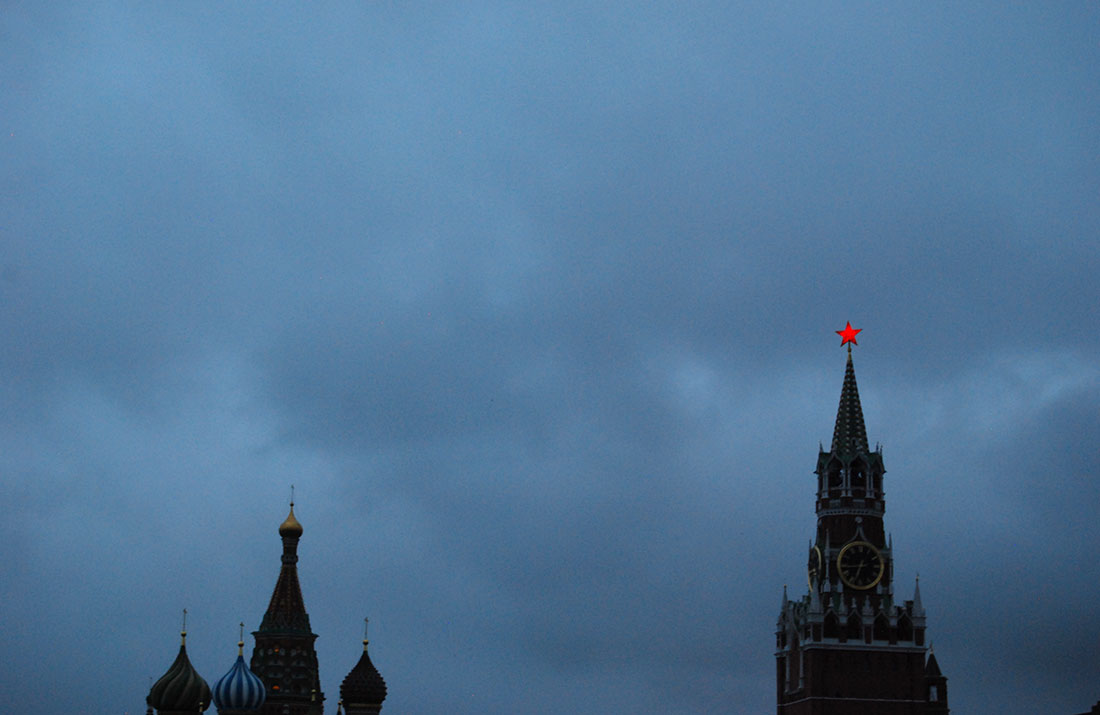 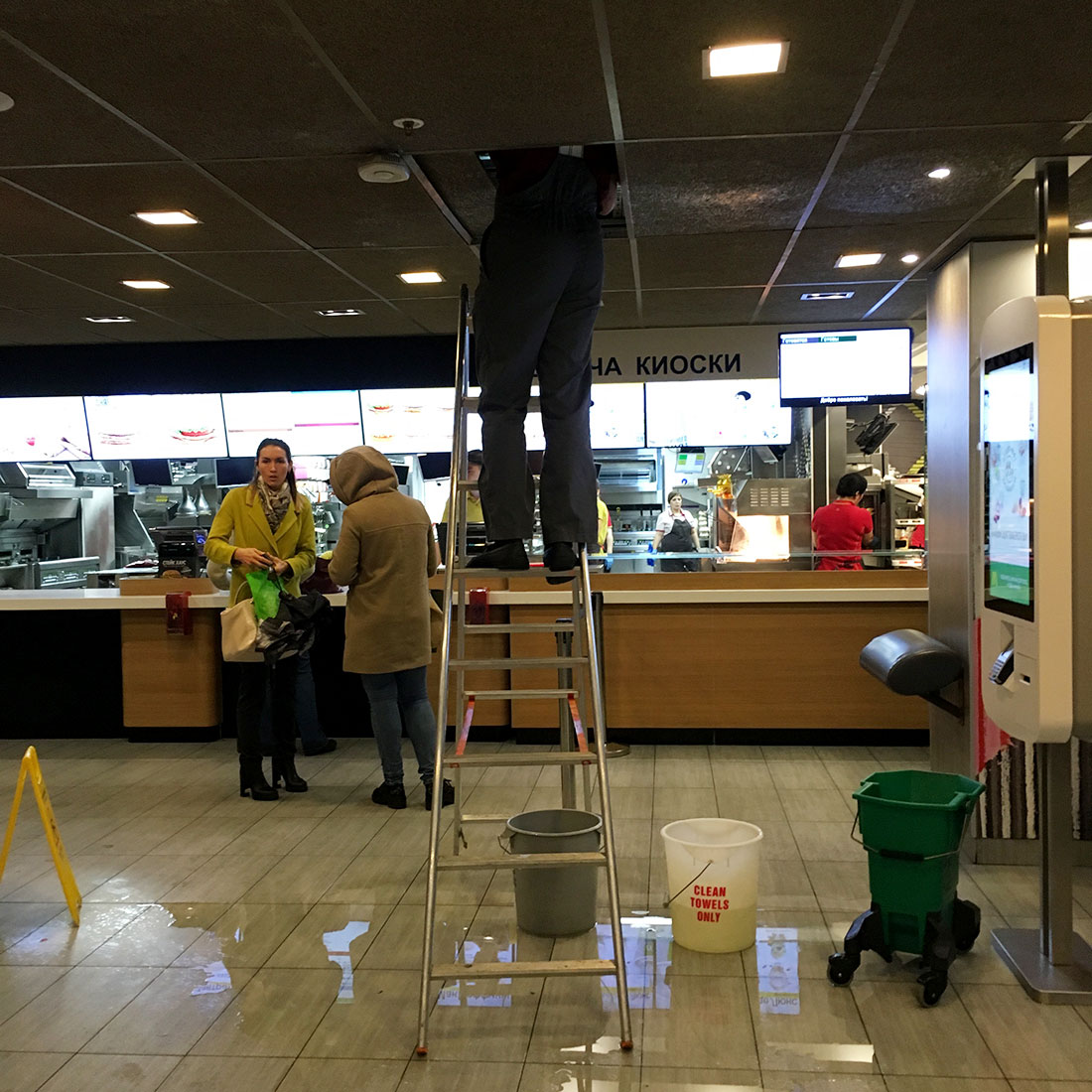 [Inside the 24 hour McDonalds where a headless man was attempting to fix a water leak.]

The next morning, we woke up at 5am and couldn’t go back to sleep so we decided to get up and explore Red Square under the beautiful blue of the drizzling early morning sky. Typically, the square and the area around it are full of tourists and locals heading to and from their destinations so it was a nice experience to see the architecture and feel the history of the square in near solitude. Then we gorged at the only place open at 6am, McDonalds, and it was heavenly! We spent the day shopping, eating and walking around different parts of the city before the evening reception back at the hotel. The hotel hallways, by the way, made me think of The Shining. In my jet lagged state of mind that night after I excused myself from the reception, I could not find my way to the elevator and kept winding up back at the reception until one of the caterers helped me locate the elevator. “Red rum, red rum”… . 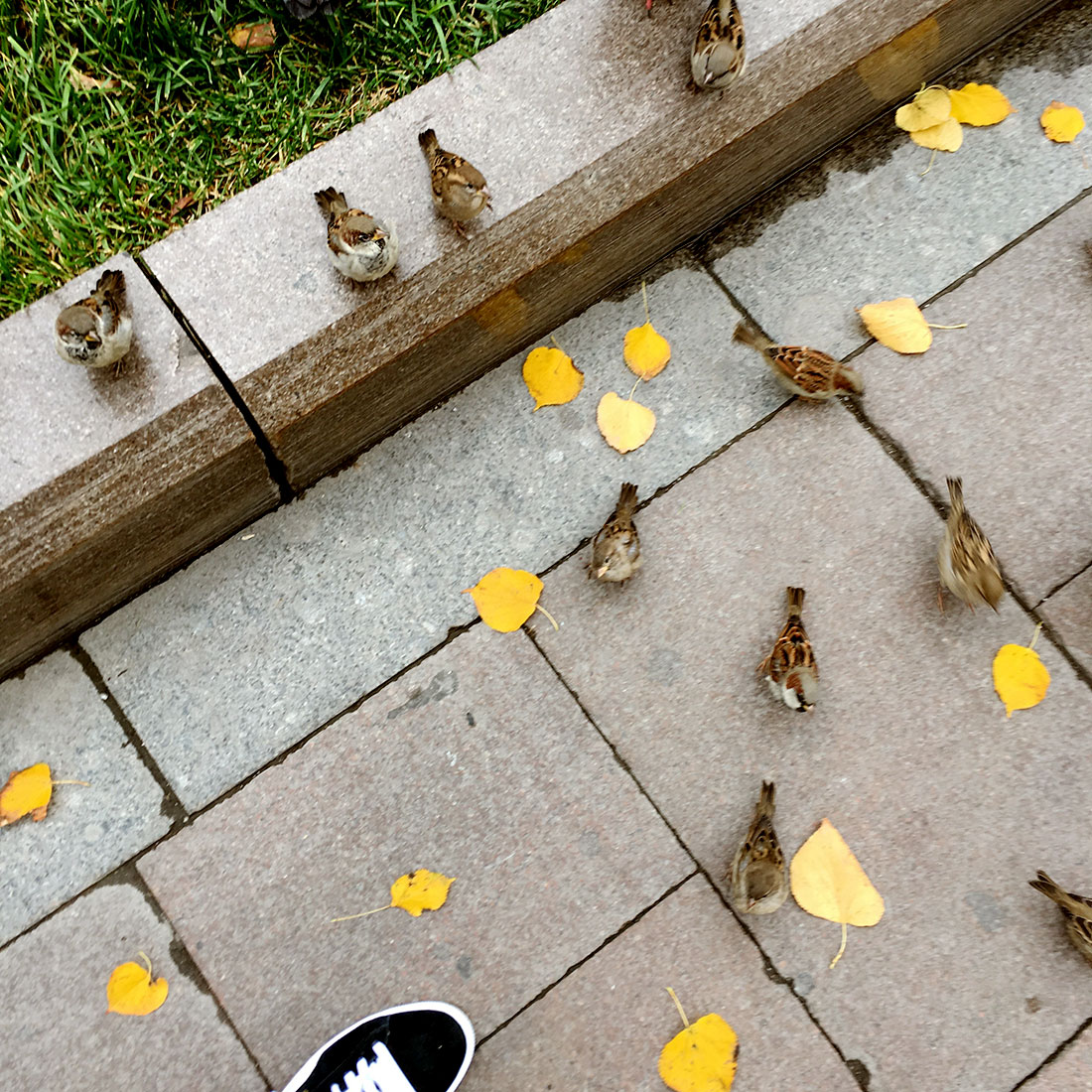 I fed lots of birds in Moscow. The pigeons were chill and fat and strutted around like they owned the place. The sparrows, however, didn’t mess around and hovered in the air in front of me like, “throw that bread, or we’ll cut you” – they had their sleeves rolled up and were holding lead pipes and everything. I think one of them had a tear drop tattoo. No exaggeration, they straight up snatched the bread right out of the air. I was scared of them a little bit.

We discovered a few art and design cooperative areas in Moscow, most notably a place called the Chocolate Factory (thank you for the tip, Laura Zucker). We went to Russia because Shannon was invited to attend the World Cities Culture Summit so she was non stop busy busy with meetings, exploring the museums and other cultural organizations around Moscow so she wasn’t able to visit the Chocolate Factory. I went solo that day, something I normally don’t mind, but this was the type of place best spent exploring with another person who would have nerded out with me on art, design, and good food. It was the highlight of my Moscow experience, other than the reception at The Pushkin Museum Quarter that had an amazing installation of digital art located in a building that had been a philosophy school back in the day. The Strelka Institute is located at the Chocolate Factory, along with great restaurants, galleries, an amazing independent book store, other creative businesses, fantastic murals, and a wondrous candy shop that will make you feel like a kid again with all of its cool candy wrappers and bins full of chocolates (I was so wiped out from the walk there that I forgot to take a photo of the bins of candy) and where they will yell at you in Russian if you don’t weigh your candy before going to the cash register. Trauma at a candy shop should not be allowed. The book store, sadly I’m forgetting the name, included two galleries and a coffee shop with a little library. I saw an exhibition of black and white photos spanning from the 1930s through the early 2000s, and another about motorbikes that had some pretty great Russian typography as part of the environmental graphics. If you ever go to Moscow, I highly recommend you go to the Strelka restaurant (thank you, again, Laura Z) right on the edge of the Strelka Institute design campus. Not only is the interior design fantastic but the food is modern and delicious! 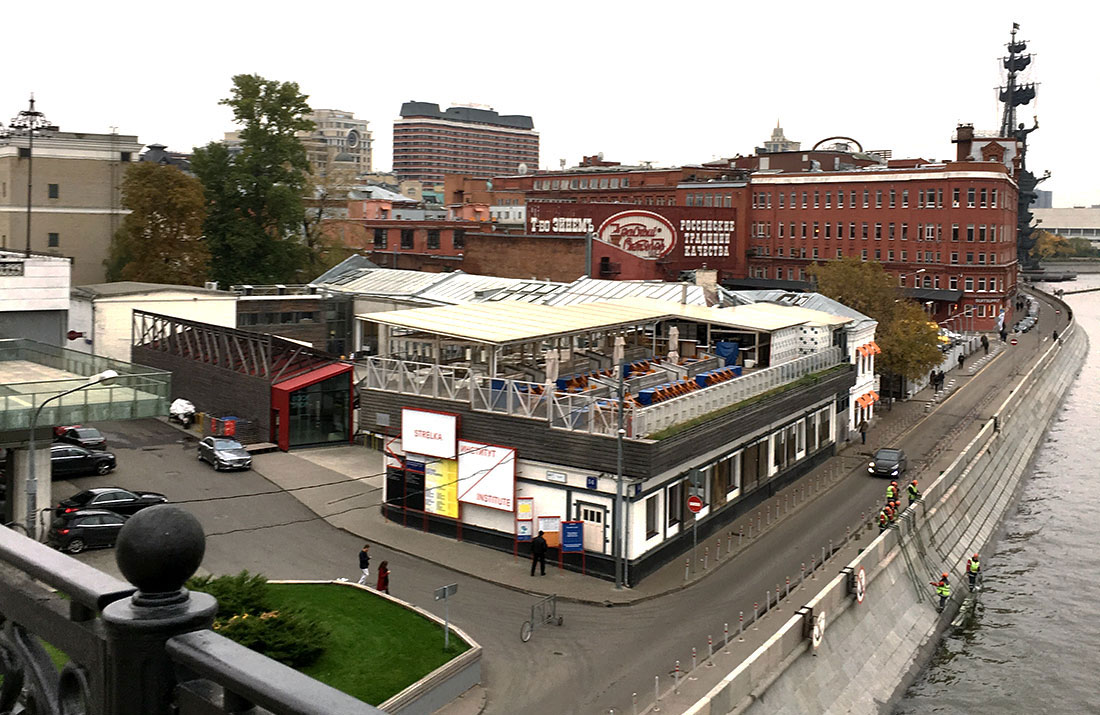 The older architecture around the city is decorative and some of the buildings and churches have beautiful domes that look like colorful onions, and the buildings that line the side streets are long with lots of windows and painted various pastel colors. Mind you, having only four days in Moscow I by no means saw every example of Russian architecture or visited any residential homes, but what I did see was lovely and unique. 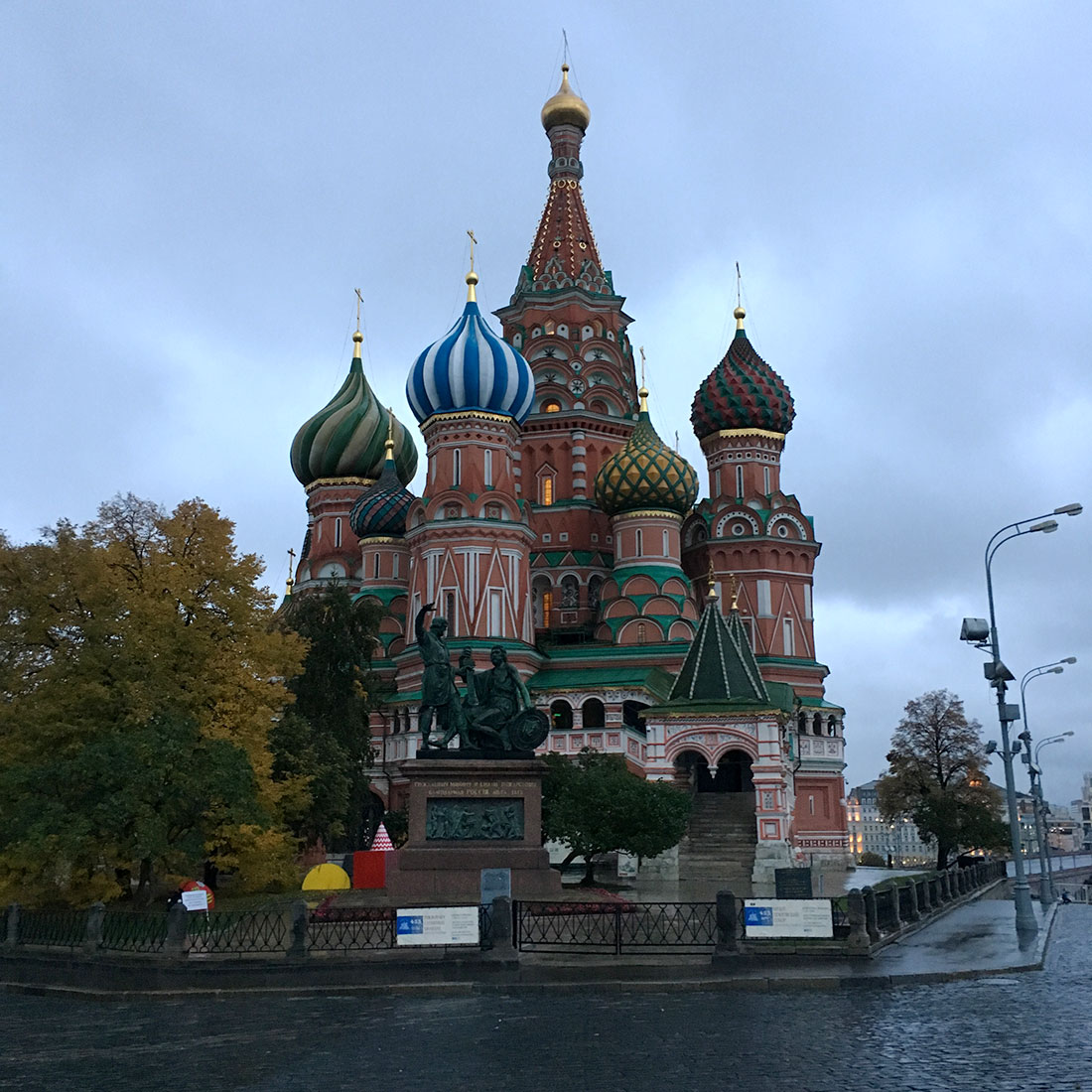 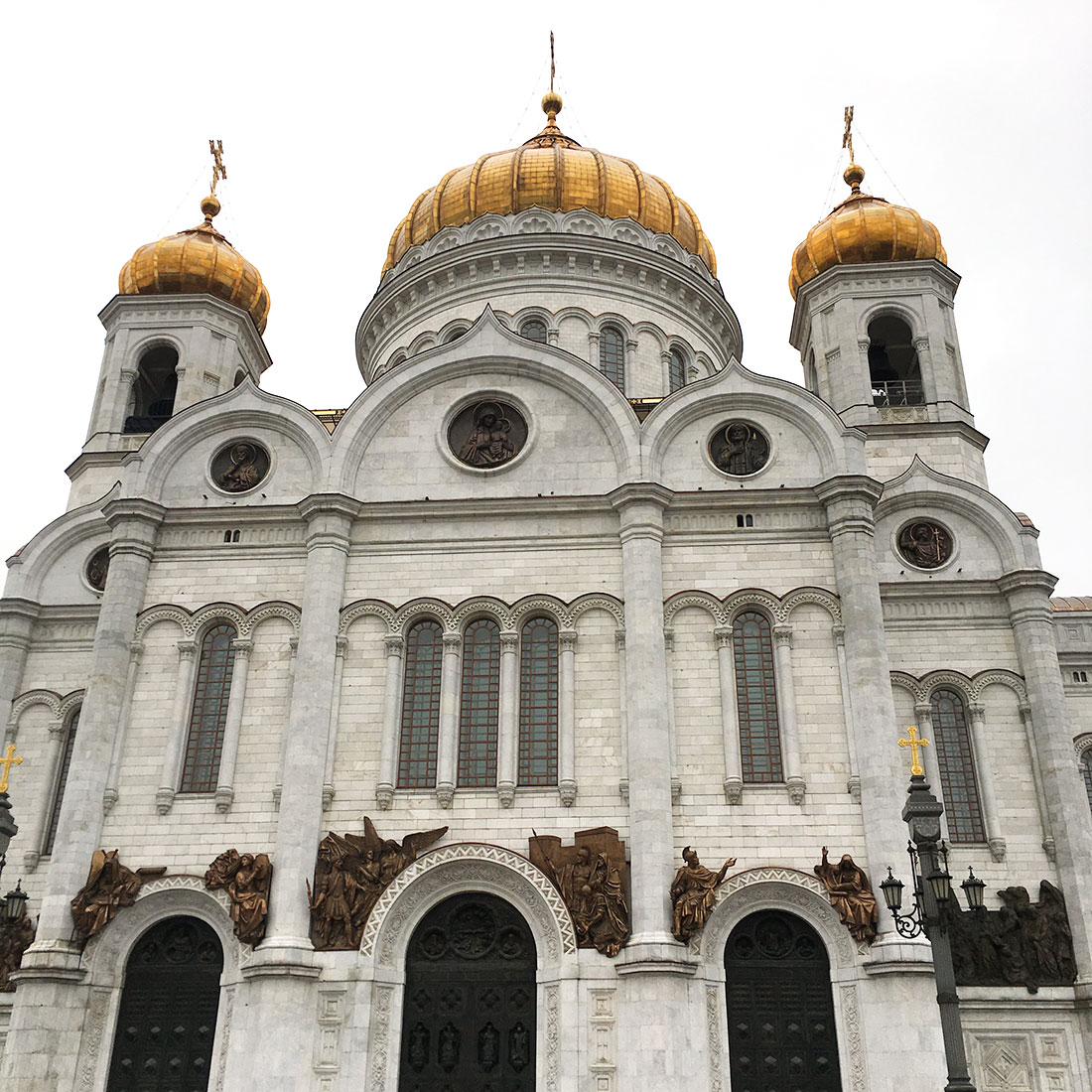 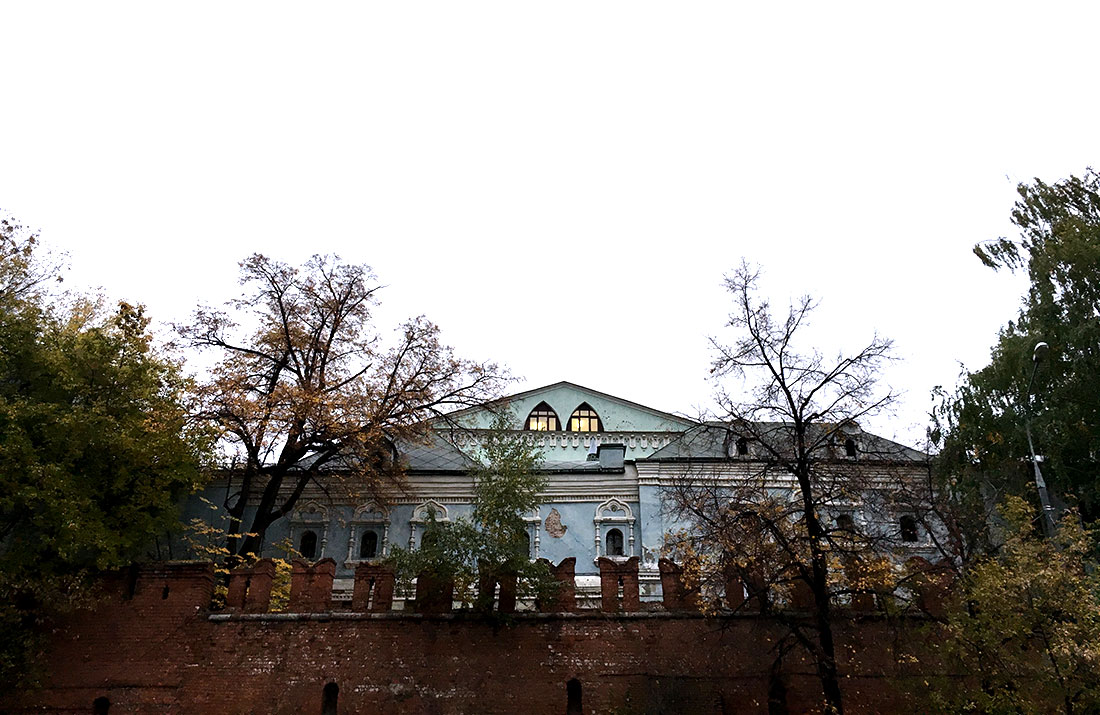 [A little bit of Moscow architecture]

If I had to describe Moscow in three words they would be: opulent, intense, and bustling. The traffic is “kashmar”, the Russian word for “this is crazy!”, and you have to keep your eyeballs open when trying to cross the street even if you have the right of way lest ye be flattened like a pancake. Areas by really busy streets allow pedestrians to cross only by way of underground tunnels, the same place where you’d catch the train, and there are great little murals on the walls lining the tunnels. Stores and hotels require you to walk through a detector, another thing that came to define part of our experience in Moscow. I always had the sense of being watched, by police, security and anyone else once they heard us speaking English. Russia and the U.S. make it equally difficult for citizens of each others countries to visit so it’s my understanding that it is less common for Russians to see American visitors than people from other parts of the world. 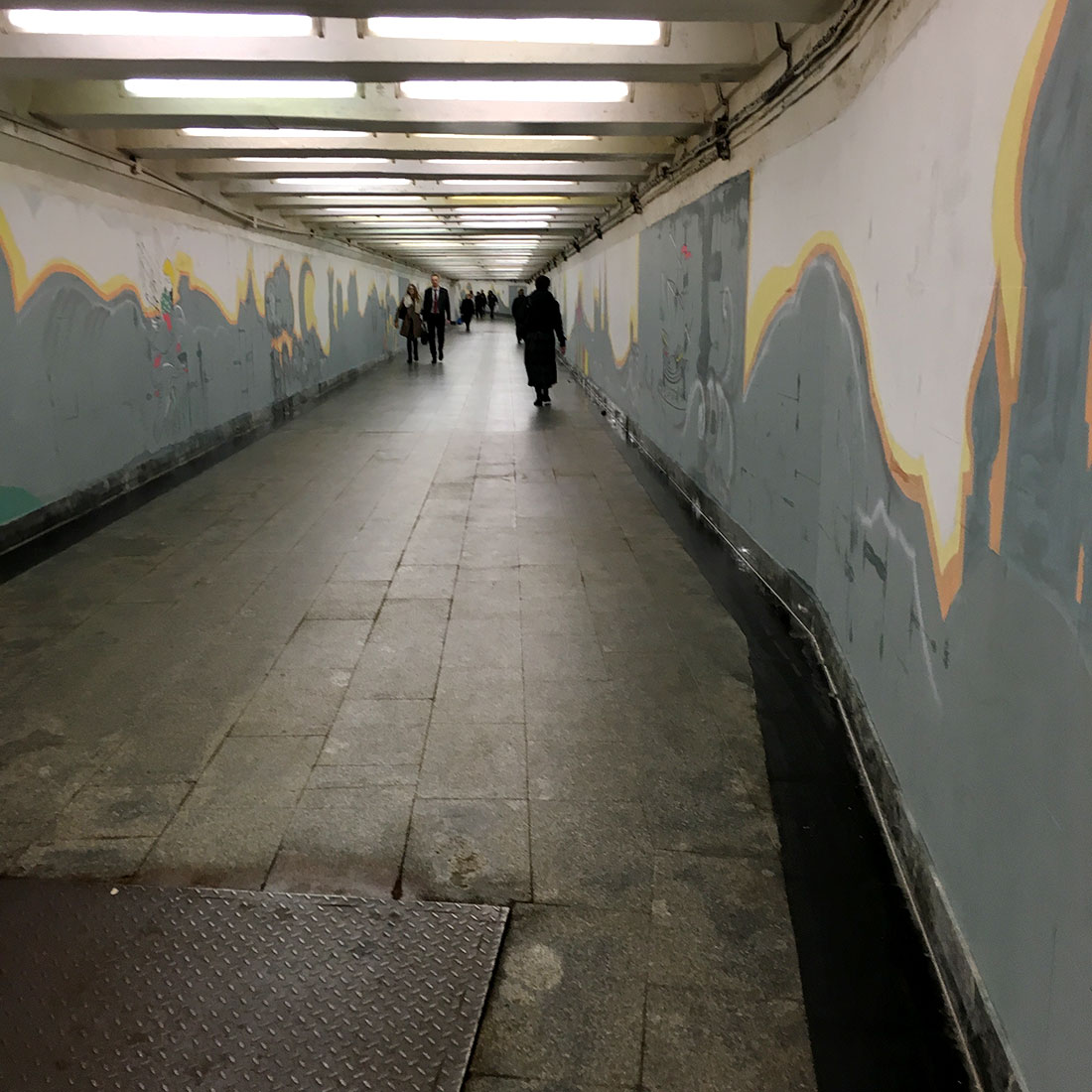 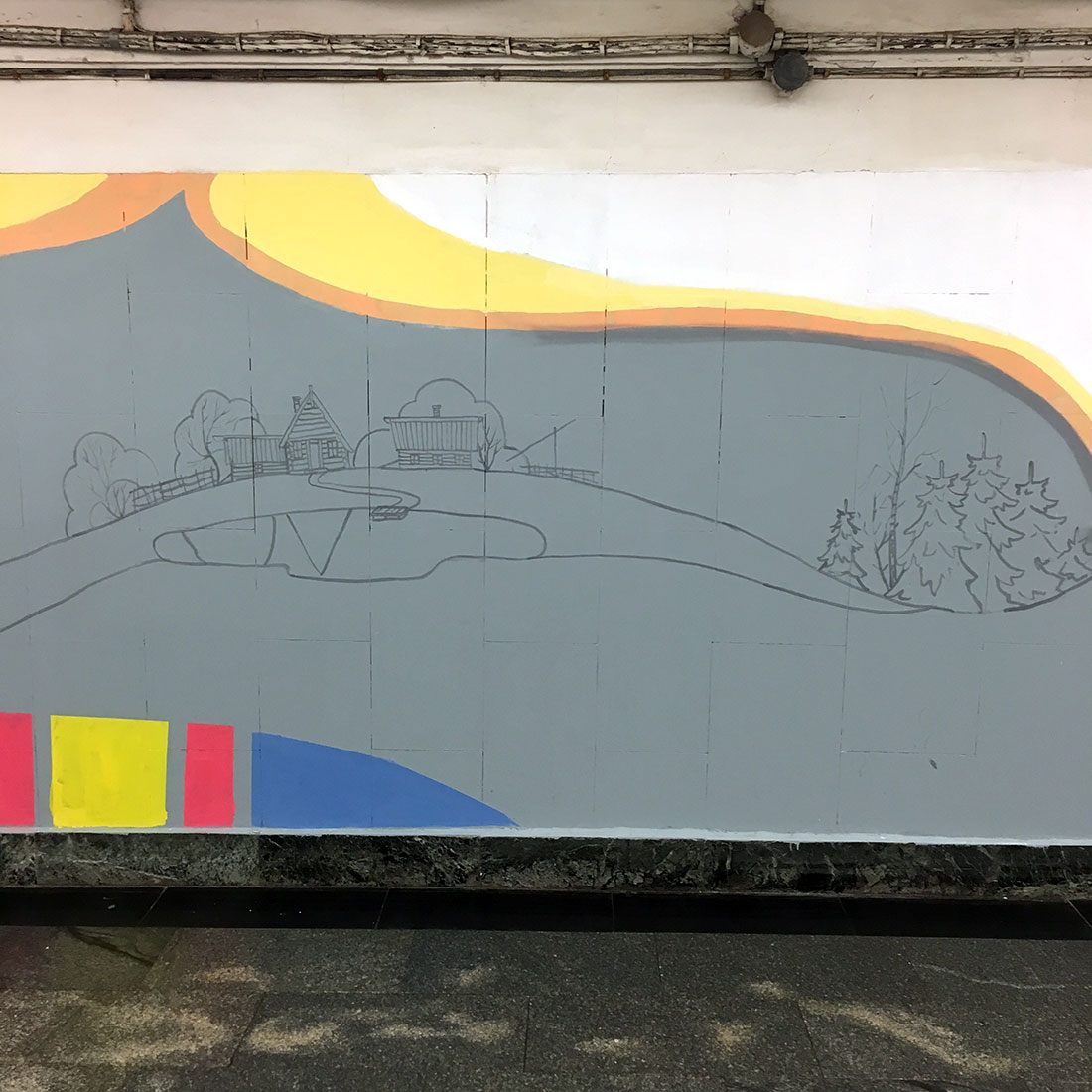 [Some of the murals in the pedestrian tunnels]

If you are ever able to arrange for an invitation to go to Russia or Siberia, I hope you’ll consider visiting. It’s a lovely, beautiful, complex country with so much creative energy and kind people. I have barely seen anything of Russia and both trips left a very memorable impression on me, so I can’t imagine the experience of spending an extended period of time exploring more places and meeting people along the way. I bet taking the train would be a very cool way to experience Russia… 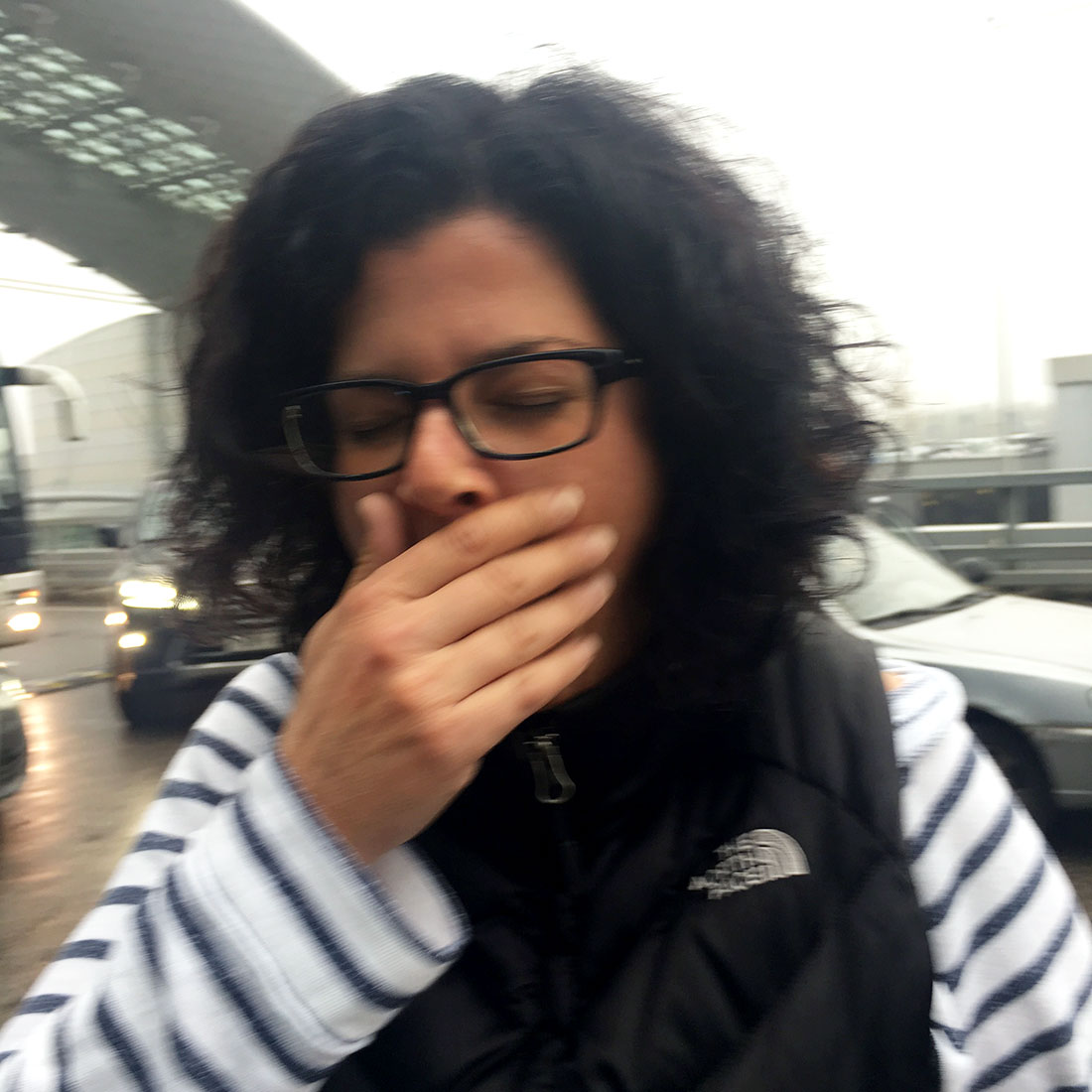 [Glamorous me, yawning and sneezing outside of the airport in Moscow just before heading in to catch our flight to Helsinki]

Next up, I’ll share some photos from the Helsinki leg of the trip. I woke up sick the day we flew from Moscow to Helsinki so my memory is a bit hazy from the fevered three nights we were in Finland but I’ll muster up some stories and share them in my next blog post. I’ll also be uploading photos to Wanderlust where you’ll be able to see more images from Moscow and Helsinki.